You may not have heard of it, but there is an alternative social media network out there called WikiTribune Social (WT.Social). It labels itself as a “non-toxic social network” that doesn’t allow the spread of misinformation and doesn’t have any advertising. It’s a different approach to the model of social media that we’ve seen with Facebook and Twitter.

At the same time, Elon Musk’s Twitter takeover – although he has claimed it is currently on hold – is set to make huge changes to the platform.

We look at these two polar opposite approaches to a social media platform to ask: what do people actually want from social media?

WikiTribue Social, or WT.Social, is a social platform where you can contribute to “subwikis” in a similar style to Reddit. It was founded by Wikipedia co-founder Jimmy Wales in October 2019 as an alternative to Facebook and Twitter. The platform runs on donations, rather than relying on advertising.

The format is meant to combat misinformation by providing evidence-based news with links and clear sources. To further achieve this goal, users are able to edit and flag misleading links.

On the homepage of WT.Social, you will find the following message:

Welcome to a place where advertisers don’t call the shots.

Where your data isn’t packaged up and sold.

Where you – not algorithms – decide what you see.

Where bad actors are kicked out and kept out.

Welcome to social media the way it should be.

Many people will find WT.Social to be an appealing alternative to other big platforms out there if they are looking for a slightly different online experience. While it’s unlikely that WT.Social will take off to be as big as Twitter, Facebook or even the new kid on the block TikTok (even Wales himself has admitted, “this is a radical, crazy experiment of mine”), it’s interesting to see what an alternative model for social media could look like.

WT.Social seems to be very much focused on the sharing of accurate information and encouraging meaningful conversations based on what is shared, without the “clickbait” that is so often seen elsewhere.

Interestingly, Jimmy Wales recently posted on WT.Social, saying: “We are seeing an influx of users from Twitter based on the news that Elon Musk is buying Twitter.” 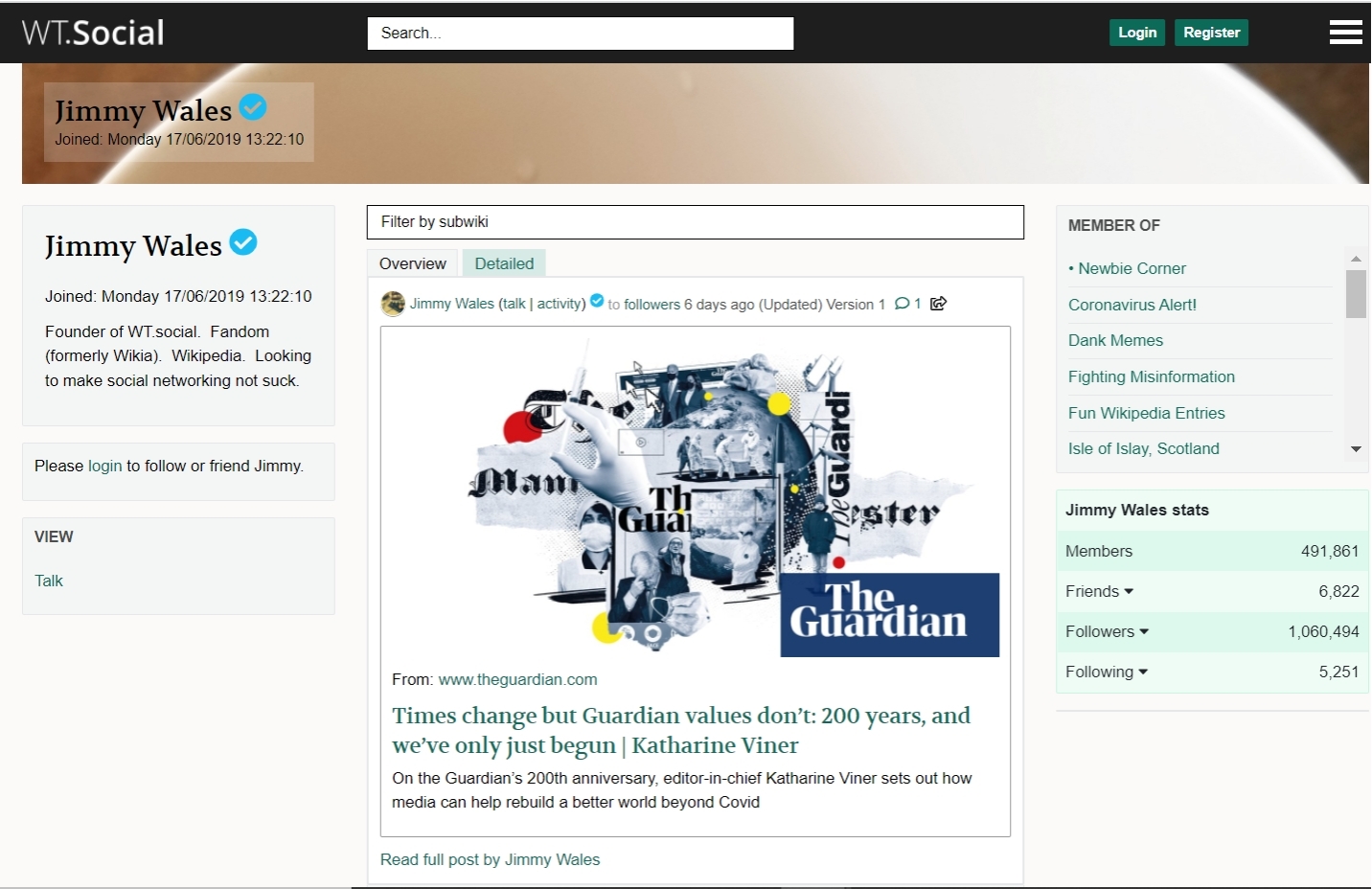 A screenshot from the profile of Jimmy Wales on WT.Social.

The story of Elon Musk buying Twitter has already seen many twists and turns, but if the $44 billion sale does go through as planned, it will undoubtedly have an impact on the way the platform operates.

Twitter is already facing criticism about the presence of abuse and hate speech on the platform, as well as so-called “fake news”, but currently they still have the power to block those that are thought to be inciting hate and violence, such as Donald Trump.

However, Musk aims to make Twitter more popular with absolute free speech, allowing people to mostly share whatever they want without regulation. Unfortunately, this approach also allows dangerous and harmful content to be published, such as racist or homophobic comments or even someone’s personal information that they haven’t consented to be shared online.

Many are concerned that this would make Twitter an incredibly unsafe online space to be, particularly for children and vulnerable individuals.

He has also stated that while Twitter will stay free to use for most people, he might ask commercial or government users for a fee to use the platform. This is perhaps one example of how Twitter, which has historically struggled to turn a big profit, might look to make more money.

Even though I think a less divisive candidate would be better in 2024, I still think Trump should be restored to Twitter

Can the model for WT.social even work?

Many will be sceptical about the WT.social model, especially the lack of advertising as this is how social media platforms make money. Indeed, its potential for growth seems limited at the moment, and relying on the users themselves to regulate and edit what appears on the platform could be seen as risky when everyone has different opinions.

However, there may be value in it for those who want a different experience on social media.

WT.Social appears to be a place where people are held accountable for what they publish – and anything misleading or harmful is removed from the platform by others who directly experience it. Instead, of short, sharp outbursts, with the potential for unfounded abusive comments, users can write detailed and nuanced responses to a particular post or shared article.

Essentially, it’s a social media platform that requires people to act as they (hopefully) would in the real world, rewarding good behaviour and encouraging healthy debate without false information or harmful words.

What do people want from social media?

The experience people want on social media really does seem to differ, which is why so many different types of platforms have appeared over time.

WT.Social is a niche platform and it does not necessarily tie in with a fast-paced online culture of instant sharing and reaction, so it may not be for everyone. It functions more like a news portal in the way that articles and updates are shared with a great deal of room for discussion underneath.

However, it is a model that may appeal to those who want to engage with others online without the negative effects on mental health that some attribute to the toxic culture on platforms like Twitter. Musk’s takeover of Twitter might be the final straw for some people and WT.Social could be a good alternative for them.