Internet of Things and 5G are both terms that have come into mainstream vocabulary relatively recently, and each of them is directly involved in the building of smart cities. Whilst these terms are fairly new, the concept of a ‘smart city’ has been around for a while and we are seeing these theories put into action more and more across the globe, with tech giants, such as Amazon and Google, playing a key role.

Here, we take a look at the concept of smart cities, how they have grown in recent years and the direction we could see them head in as the tech giants become increasingly involved in urban development.

What is a smart city?

A smart city is designed to improve the quality of life for every member of the urban community. This is achieved by running the city as efficiently and eco-consciously as possible through information and communication technology and data collected by Internet of Things (IoT) devices. Smart cities are also designed to make contact between government and citizens easier and allow real-time responses to goings-on in the city, meaning they can adapt swiftly to changing situations.

Features of a smart city range from smart bins which notify authorities when they are nearly full and allow refuse collectors to plan the most efficient routes around the city, air quality monitoring across cycling routes, street lamps designed to save energy depending on pedestrian volume, and traffic lights choosing the optimum time to turn green based on traffic volume.

Where can we see smart cities already in action?

From Toronto to London to Hong Kong, smart cities are already a reality in many locations around the world. New York is a big player and is using smart technology to monitor the one billion gallons of water used by its 8.5 million population each day across the city, whilst providing individuals with the opportunity to monitor their usage.

Singapore has developed a traffic monitoring system called One Monitoring where citizens can access traffic information across the city collected from surveillance cameras and taxis. Another feature in Singapore, which is in use in many other smart cities around the world too, is real-time monitoring of car-parking space availability. Barcelona is also making use of city-wide apps but here with the aim of keeping citizens up-to-date with what local administrations are up to. They’re also continually working on providing citywide free Wi-Fi.

How are the tech giants involved? 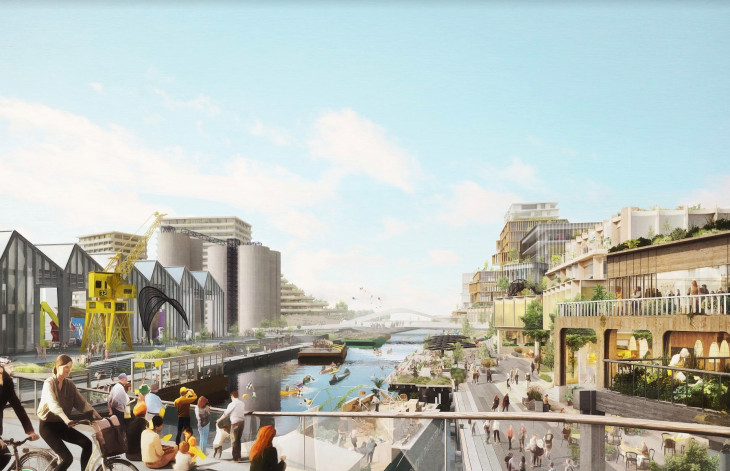 As smart cities are so intrinsically linked with developing technology, it is unsurprising that the big tech companies are heavily involved in the building and growth process. Huawei, Google, Cisco, Amazon, Facebook and plenty more have all marketed various ideas for smart cities.

Cisco was one of the first of the big tech companies to get heavily involved in the development of smart cities. Back in 2009, they introduced their Intelligent Urbanisation initiative which was designed to help cities around the world integrate technology into their urban planning in order to cope with increasing urban populations and make city management more efficient. Today, Cisco has created an entire branch of technologies devoted to the development of smart cities.

Devices that use the Internet of Things are crucial to the collection of data that’s necessary for running a smart city. Therefore, Amazon and Google’s investment in smart city initiatives shouldn’t come as a surprise when they have been making our homes increasingly smart with devices such as Alexa and Google Home for years. It was only a matter of time before the scale increased!

Amazon’s biggest contribution to smart city development at the moment can be seen in their Ring doorbells and cameras. The devices are designed to reduce crime rates and the company has even introduced a neighbourhood app which allows users to share images and warn others of suspicious activity in their local area.

Google is also getting involved, with plans being approved for the development of smart urban spaces in Toronto and Mountain View, California. In Toronto, Sidewalk Labs (a sister company of Google) is developing a plan and waiting for final approval to transform a disused area of the city into a high-tech and eco-friendly smart neighbourhood, building from the ground up.

Google has also introduced plans in recent years for creating a new development in Mountain View, California, which is the home of their HQ. As well as redeveloping their offices, they propose creating as many as 8,000 new homes in a newly developed smart space that prioritises pedestrians over traffic.

Are there any dangers to smart cities?

Although smart cities are designed with increased efficiency and sustainability at heart, there are also a number of concerns surrounding the technology involved in creating a truly smart city. The combination of sensors, cameras and constant data collection has led to a number of concerns about surveillance, vulnerability to hacking and transparency about what our data is being used for.

The online nature of a smart city naturally makes it more vulnerable to cyber-attacks, so digital security is paramount. For example, if hackers are able to access systems managing electricity grids, this could lead to widespread blackouts. Equally, the frequency and volume of personal data collected poses a risk to privacy if the systems are breached. Aside from hypothetical (but very possible) system breaches, an extreme version of a smart city that sees every part of life under surveillance raises ethical questions about what it means as a human to be living under constant surveillance and where to draw the line.

What can we expect in the future?

There are two main schools of thought when it comes to the future of smart cities – the optimistic and the pessimistic.

Those optimistic about the growth in technology predict that there could be up to 3 trillion IoT devices in use by 2035, many of which will be embedded in smart cities. The increasing development of these technologies will continue to push the boundaries of smart city achievements and it is an exciting time to be involved in urban development.

Conversely, those more sceptical of the risks of smart city technology predict that technologies’ inability to cope with demands and individual fears about data usage may stall the development of smart communities.

Ultimately, the development of smart cities is happening hand-in-hand with the tech giants and will have a profound effect on all aspects of city life and management, from public safety to transportation and pollution monitoring. As long as developments are occurring with transparency, data security and accountability in mind, smart cities could see brilliant improvements to the quality of life, without turning day-to-day life into dystopia.