Within the world of business, it is a common practice to recognise popular innovations and adapt them into your own business model. Competition is healthy in the marketplace, but where does the line between adaptation and copying lie?

Over the years, Facebook has been accused of copying features from competing social media platforms for Facebook and Instagram, with the company’s CEO Mark Zuckerberg being questioned on the matter during antitrust hearings in July of 2020.

This has led people to ask whether or not Facebook’s success has been built on its ‘copying’ of other apps’ features and whether this approach makes it harder for new platforms to succeed.

Throughout its long tenure, there have been many instances of Facebook adopting new features. Due to the nature and timing of these implementations, there has been much debate as to whether Facebook was simply adapting to market trends or directly copying its competitors. Some examples of Facebook’s history of ‘copying’ are outlined here:

March 2015 – Facebook launches ‘On This Day’, a feature that allows users to see posts they made years ago on the same day. This feature was exactly like the app Timehop which had roughly 6 million daily users at the time Facebook launched their version. Timehop’s chief operating officer Rick Webb said that Facebook copied the app down to the tiniest of details such as the colours used and the picture frame graphics they used, forcing Timehop to change.

April 2020 – Amidst the Covid-19 pandemic, Facebook announces Messenger Rooms, which presents itself as a competitor to Zoom and Houseparty, offering video messaging for groups of people.

August 2020 – Instagram brings out ‘Reels’, a feature that allows users to make short videos set to music, in a very similar format as TikTok videos.

It was Facebook’s ‘copying’ of Snapchat that has become a particularly well-known example. In 2013, Facebook tried to buy Snapchat, but CEO Evan Spiegel refused the offer. After this, Instagram introduced several features which were very similar to that of Snapchat, such as filters and stories that disappear after 24 hours.

Former Instagram CEO Kevin Systrom admitted that Snapchat ‘deserves all the credit’ for popularizing these ideas. Just 2 months after the launch of Instagram stories, it had 100 million daily users, 200 million by April and 250 million by June 2017. This dwarfed Snapchat’s 166 million daily active users. 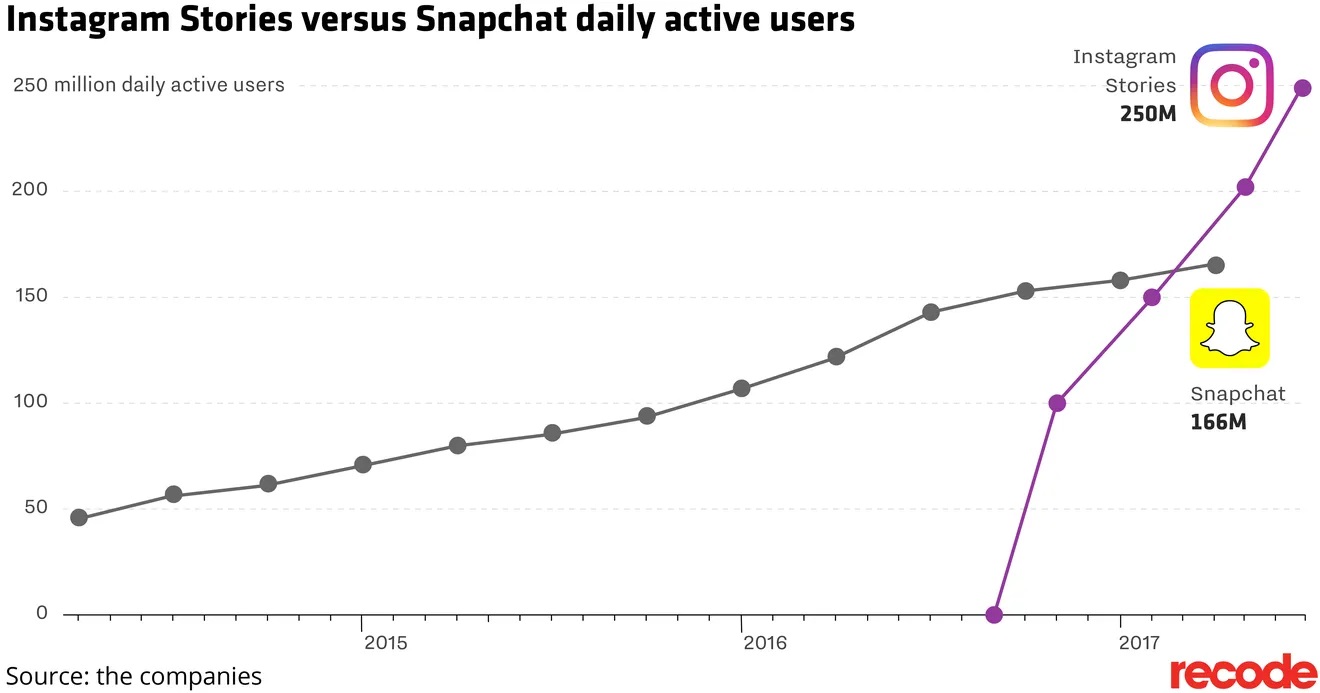 Following these instances, Facebook has come under scrutiny. In July 2020, Facebook, amongst other tech giants such as Google, Apple and Amazon, testified before congress as part of an antitrust hearing which was investigating whether these companies were engaging in anticompetitive business practices.

During this hearing, Zuckerberg had a tense exchange with Democrat of Washington, Rep. Pramila Jayapal. Jayapal questioned Zuckerberg on Facebook’s billion-dollar acquisition of Instagram in 2012.

In these exchanges, it is revealed that Facebook wanted to buy Instagram to avoid competition which could have hurt their own platform. New York Democrat, Rep. Jerry Nadler said of Instagram as competition, that “rather than compete with it, Facebook bought it. This is exactly the type of anti-competitive acquisition the antitrust laws were designed to prevent”.

When speaking with Instagram co-founder Keven Systrom, another email chain showed that Zuckerberg told Systrom that “at some point, you’ll need to figure out how you actually want to work with us”. Systrom had stated that he felt such comments were a threat and he was concerned Facebook would make moves against the company if he did not sell.

Mark Zuckerberg didn’t deny the messages. However, he did disagree with their characterisation as threatening, saying that there would have still been space for both companies to compete.

Whilst copying rival companies is not illegal, Facebook was questioned regarding whether it had been boxing out competitors and abusing its market power. Zuckerberg disagreed with the criticisms that Facebook had copied their competitors or threatened them.

During the antitrust hearing, he did admit that Facebook has “certainly adapted features that others have led in, as have others copied and adapted features we’ve invented”. But when asked directly by Jaypal if Facebook ever threatened to clone a product from another company whilst attempting to acquire them, Zuckerberg replied by saying “not that I recall”.

As new apps are developed and trends rise in the marketplace, it is natural for apps to adapt to try and engage with these popular trends. However, the means of doing so, the extent of how close these features are to other independent apps, and what these means for the marketplace as a whole are things that need to be scrutinised.

Shifts in the marketplace

It is also important to recognise the natural shifts that occur within the digital media landscapes. Whilst apps may be adopting each other’s features, we cannot say that all social media services are converging or becoming multiple iterations of the same, as some users will always gravitate towards certain apps for their culture and ethos.

Within the dialogue surrounding Facebook vs Snapchat, many Instagram users are fuelled by ‘likes’ and knowing people are looking at their content. Being able to see your followers watching your stories, alongside your pictures, tapped into pre-existing interests of users within the app. This may have made Instagram more conducive to this type of growth. Instagram also had features that made it easier to find friends or to suggest other accounts you might like, which Snapchat was not as efficient at doing.

Earlier in the year, after updates to WhatsApp’s privacy policy, we saw a migration of users to the messaging app Signal; a company with a more user-centric focus that promoted itself as prioritising privacy and data protection.

WhatsApp itself uses some of Signal’s encryption software. However, through its ethos as being more user-centric than its competitors, Signal is able to hold its own in the marketplace. In this example, cultures and specific demographics (Signal originally being used mainly by activists and journalists) have influenced the app’s popularity.

Another example of the power of user demographics in popularity lies in the rise of TikTok. Whilst TikTok began with the acquisition of musical.ly, the interest in short-form media and clips initially rose from apps such as Vine.

The short videos lent themselves well to aggregation, and Vine compilations generated millions of views on sites like YouTube. However, Vine shut down in 2017. This left enough time so that when TikTok began to grow, those who used Vine and Musical.ly wanted more of this type of content and TikTok could fill that gap.

Demographically speaking, whilst Facebook’s largest demographic by age is those between 25-35, TikTok offered space for the younger generation with roughly 50% of TikTok’s global audience being under the age of 34 and 41% of users being aged 16-24. Even after the implementation of Reels on Instagram, TikTok is still a market leader in this style of content.

The impact of ‘copying’ in the digital landscape

Another of the central risks of larger tech companies ‘copying’ features from, or acquiring, smaller companies and startups is those larger companies becoming a monopoly within the marketplace.

Roger McNamee, an early investor in Google and Facebook, said that the dominance of Facebook and Amazon “is choking off the start-up world”. 43% of all online retail revenue flows through Amazon (according to the market research company Slice Intelligence), whilst Facebook counts a third of the world’s population in its monthly user base.

In the wake of large tech companies having such dominance in the marketplace, there have been calls for better regulation of these companies by government bodies. The UK’s competition regulator said that the UK “should tackle the dominance of online giants”, whilst senior research fellow in computational science from the Oxford Internet Institute, Taha Yasseri stated that, for companies such as Facebook who rely on data harvesting and advertising, “the data from multiple platforms can lead to an extremely high level of precision in modelling our traits and behaviours. This amount of power should be regulated”.

However, many of those within Silicon Valley say that copying is fair, and a central part of business competition. It is not certain that the copying company will produce these features in a manner that is equal or better to the original. Whilst Instagram’s Stories and filters may have damaged the reach of Snapchat, Facebook’s Stories are not as popular, and Reels are yet to overtake TikTok.

As a response to the seemingly infinitely expanding scope of companies like Facebook and Amazon, potential alternative market shifts could see investors moving to closed networks that Facebook will not make moves into. An increase in regulation could also see the tech giants’ hold on the marketplace limited in ways that would allow space for new start-ups.