In our blog on the future of search, we discussed how search was evolving beyond the search engine as we typically understand it. One concept that we explored was ‘vertical search’ – which is a search function within one particular website.

Then, recently, our attention was caught by an article on how Spotify has become filled with bizarre and generic artists like ‘White Noise Baby Sleep’. In the article, the author looks at examples of how people have optimised the names of their phoney ‘artists’ or ‘songs’ in order to target particular search terms and maximise streams (therefore making more money).

Popular search terms that returned these kinds of strange results included those relating to ‘music for sleep’ ‘sound therapy’, ‘music for relaxation’ and so on.

On Spotify, if your music ranks highly for a generic search term like “relaxing” or “white noise,” you can accumulate enough listens to steadily make hundreds, in some cases thousands, of dollars a month with minimal effort. https://t.co/SRHUt2BP38

This got us thinking about whether individual platforms will have to start taking measures against ‘spammy’ SEO techniques, much like Google had to once it realised people were using dishonest SEO tactics.

Below, we take a look at SEO spam on Spotify in more detail and how it sits within wider considerations about search engine optimisation.

What is the situation with SEO on Spotify?

When you enter a search term into Spotify, it will return the most relevant results for you. Often that search term will be a particular song or artist, in which case Spotify returns the most popular option under that name. Or, it might suggest the one that the algorithm feels is most relevant to you based on your listening history.

However, sometimes you might search for a particular mood or type of music. This has been an increasingly popular way of finding music as people realise they have unlimited access to all sorts of songs and can find music specifically for relaxing or for concentrating while they study.

In these results, you often get an ‘official’ Spotify playlist as well as many other ‘unofficial’ playlists, albums, songs and artists that use the keywords you have typed in. What many have discovered is that it’s possible to ‘optimise’ the names of artists, songs, albums and playlists in order to appear high up in these search results.

This has led to results that have been spammed by opportunists who can upload these bizarre and generic tracks. For a brief period (from 2018 to 2019) artists could upload directly to Spotify without a distributor which may explain the existence of this spam. After this point, artists were required to use a distributor to upload, but these distributors can still help tracks be monetized by using SEO tactics.

Inspired by Peter Slattery’s research, we decided to give it a try for ourselves to see what we could find.

Type in something like ‘music for stress relief’ and you get an artist called ‘Relaxing Music for Stress Relief’ with 1000 monthly listeners.

If you look in the songs section, you find the same song titled ‘Music for Stress Relief’ uploaded over and over, all by different artists like ‘Music for Cats’ or ‘Calming Music for Dogs’.

It certainly seems as though there are people out there who are taking advantage of these types of searches as much as they can! 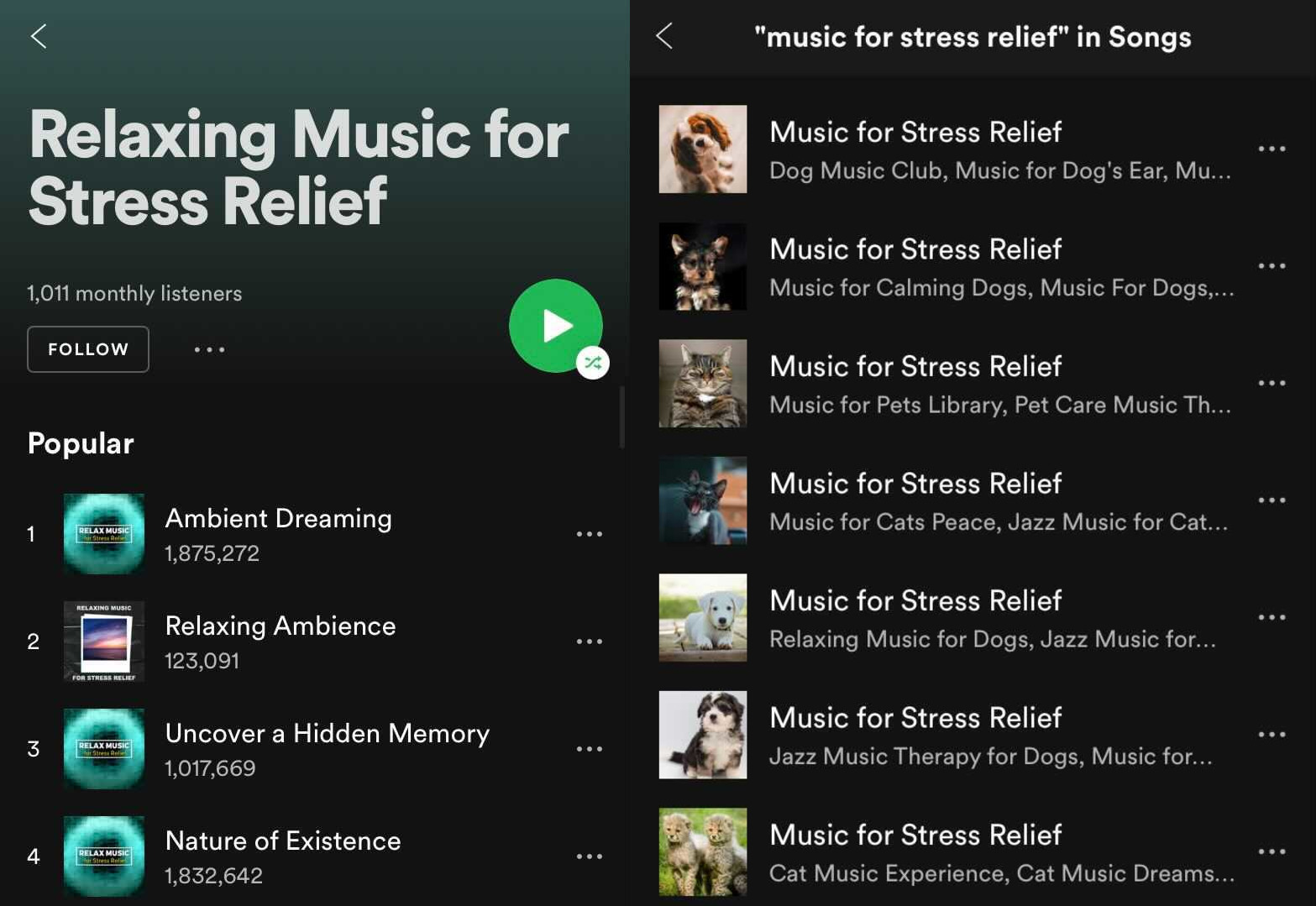 An example of where ‘music for stress relief’ has been targeted.

Is there anything wrong with this?

On the one hand, yes, because it’s a practice of putting out a load of fake music purely for money-making purposes (especially when it’s just the same “song” uploaded over and over). This detracts from the value of real artists who are uploading their music onto Spotify and trying to make a name for themselves.

However, most of these ‘spammers’ are targeting very niche areas relating to sleep, stress, meditation or relaxation to make money ‒ they aren’t actually trying to make a following or compete with actual real artists. If people want to search for music by a keyword, why shouldn’t they be able to take advantage of that?

Plus, just like with Google, there are certain things that real artists can do on Spotify ‒ such as including keywords ‒ which give them a greater chance of increasing their visibility. That’s just how the platform works!

Still ‒ it does make Spotify seem less like a platform for actual music and more like a platform that anyone can hack if they put the right keywords in. There’s something disconcerting about having the same song (if you can even call it a real song) appear over and over again disguised under different artists.

Will we see Spotify cracking down on SEO spam in the future?

When SEO first emerged on Google, there were simple cheat methods that you could use in order to get your websites higher in the rankings. Now referred to as ‘Black Hat SEO’, these techniques included keyword stuffing, blanking out text so that it could be read by search engines but not seen by the user, and creating link farms.

Obviously Spotify is not a search engine and operates in a different way to Google, but we wonder if we will see a crackdown by sites like Spotify on those who attempt to hack their search functions with keyword spam and other underhand methods. It’s important for new and unknown artists to upload to platforms like Spotify so they can reach new audiences, but this shouldn’t necessarily mean that Spotify also has to be filled with these fake artists.

Perhaps methods of identifying when the same song has been uploaded over and over under different artists and penalties for doing so? Or penalties for stuffing keywords into artist, song or album names with a requirement to make them sound ‘natural’? However Spotify chooses to do it, it would go a long way to making it a higher-quality platform!