Whether you’ve fallen victim yourself or just caught wind of the rumours flying around, chances are you’re aware of the conspiracy theories surrounding Facebook and Instagram’s use of the microphone to better target their advertising. Are these social media giants really listening in on our conversations or are we guilty of letting our paranoia get the better of us?

Well, it looks like there’s evidence to suggest both could be true…

Despite Facebook repeatedly denying claims of eavesdropping, allegations are still in circulation. So, either we’re being overly distrustful, or there is a legitimate cause for concern. Either way, with ads becoming increasingly more personal, it seems that no matter how many times the tech giant dismisses it, this conspiracy is a tough one for everyone to shake off.

These concerns likely stem from an update Facebook made back in 2014, whereby the app would listen for ambient noises whenever a user was writing a status. This feature was introduced as a way of allowing users to share and discover new music, TV series and films. Unsurprisingly, however, this led to claims that Facebook was ‘always listening’, and prompted the social media giant to pacify concerns, stating that “the user is in complete control” and that “the raw audio never leaves the phone”.

What do we know for sure?

Whilst it pales in comparison to Google, who can boast a predicted ad revenue of $73.8 billion dollars this year, Facebook is the clear runner-up for digital and ad sales. Over one billion daily active users led to Facebook’s ad revenue reaching $9.16 billion for the first quarter of 2017, with mobile making up 87% of that staggering sum. That kind of revenue growth – a 45% year-over-year increase – certainly prompts questions; people are clicking on these ads because they have become so well-targeted.

We’ve all been there – you mention something to a friend in passing and then later find an advert for it on Facebook. But does anyone have concrete evidence? Well, whilst a fair few have taken to Twitter to express their concerns, others have turned to YouTube to prove that Facebook is in fact eavesdropping on our conversations (check out this video that went viral last year). 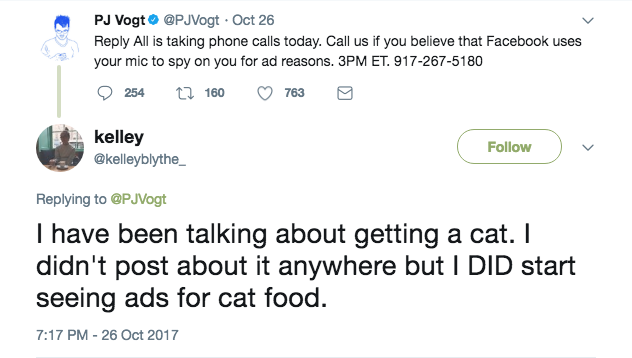 And if that wasn’t enough…

Off the back of these concerns, the BBC tasked cybersecurity expert, Ken Munro, with building a prototype app that had the ability to listen in on conversations. Results showed that such an app was not only feasible but it could operate without any significant drain on the battery life – something that could easily raise suspicions.

So, we know it’s possible, but could it actually be the case?

Conspiracy theories aside, when it comes down to it, most – if not all – aspects that are factored into targeted advertising are easily explained. This covers information such as location, demographic and profile details… not overly concerning, right?

But it runs a little deeper than that; Facebook’s computer engineers have the ability to create complex algorithms that can track our behaviour and even predict the kind of purchases we might make. In essence, they don’t need to listen in on us talking about getting a cat to know that we might be the kind of person to do so.

As Antonio Garcia Martinez says, “Facebook can find you on whatever device you’ve ever checked Facebook on. It can exploit everything that retailers know about you, and even sometimes track your in-store, cash-only purchases; that loyalty discount card is tied to a phone number or email for a reason”.

So, whilst it probably won’t put your mind at ease, the chances are that Facebook aren’t listening in on our conversations because, quite simply, they don’t have to! They’ve just spent a looong time getting to know us – perhaps a little too well.

Coincidence or cause for concern? Let us know what you think!